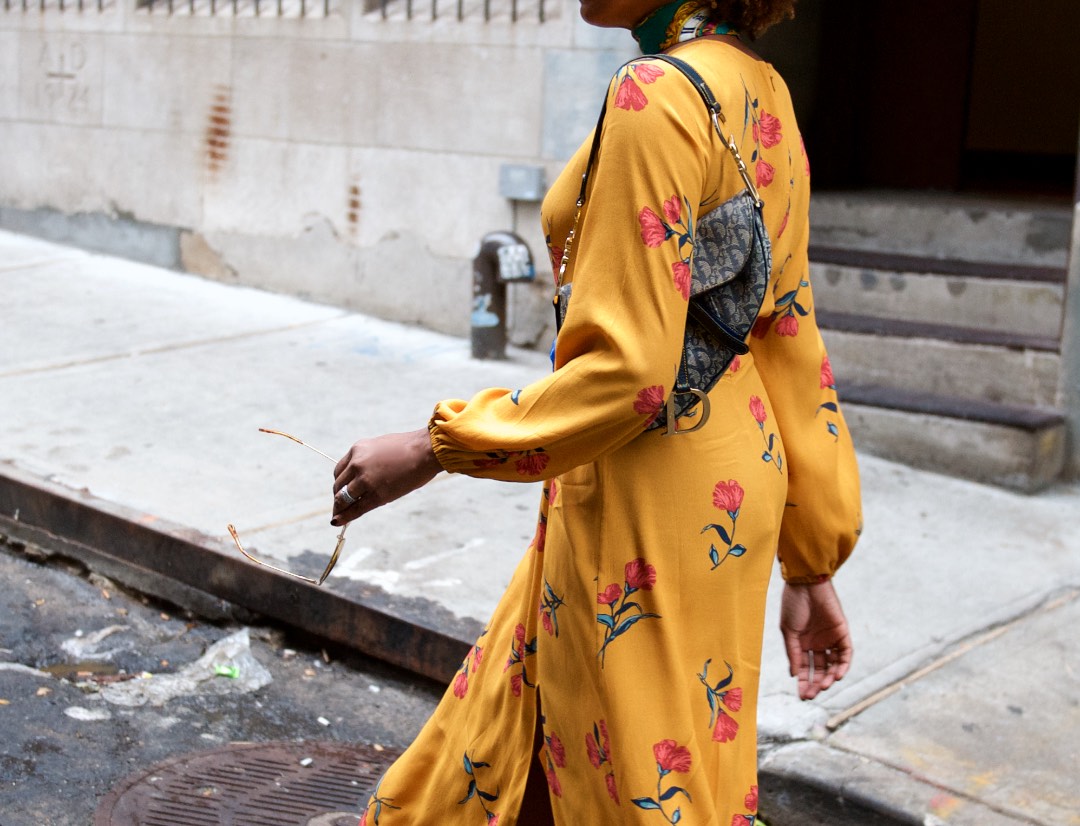 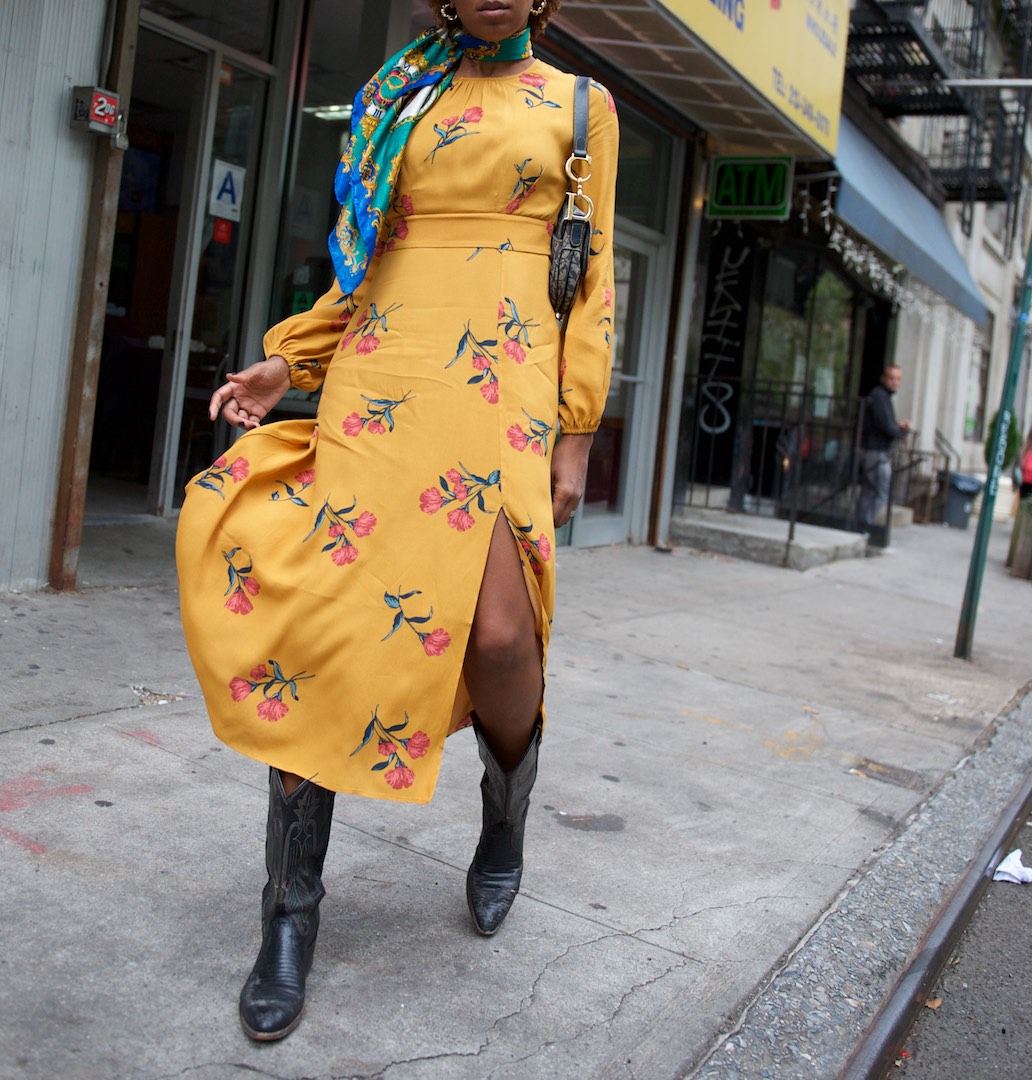 I can understand the argument for being reluctant to get rid of things in your wardrobe when moments like now come around.

How to style western boots is one of the biggest fashion questions and trends at the moment.  Granted, I’ve got rid of lots of mine (I still have these DIY hacked red vintage pair), and the above black beat up pair are ones I can’t purge either. I think I even bought them with the split because my brain is always drawn to the imperfect and I find that side of vintage appealing.  Check Etsy for more vintage western boots and when thinking how to style western boots, just fling on a flowy dress – requires zero-ish thought.

I paired them with this &OtherStories dress in a typical combination that you also know I’m drawn to.  The vintage scarf is a summer purchase that is clearly making it’s way into Fall for me I’ve noticed.  The same for the vintage Dior saddle bag which was found right before the new Dior hit the market.  Thank God for the odd timing.  If you’re after one, check @vintage_armoire (she ships super fast) and Vestaire Collective.

If you’ve still wondering how to style western boots, I say try them with loose midi skirts too or even wide wide leg cropped trousers or jeans plus a slouchy knit or bomber jacket for maximum non try hard vibes.

The post How To Style Western Boots appeared first on Where Did U Get That. 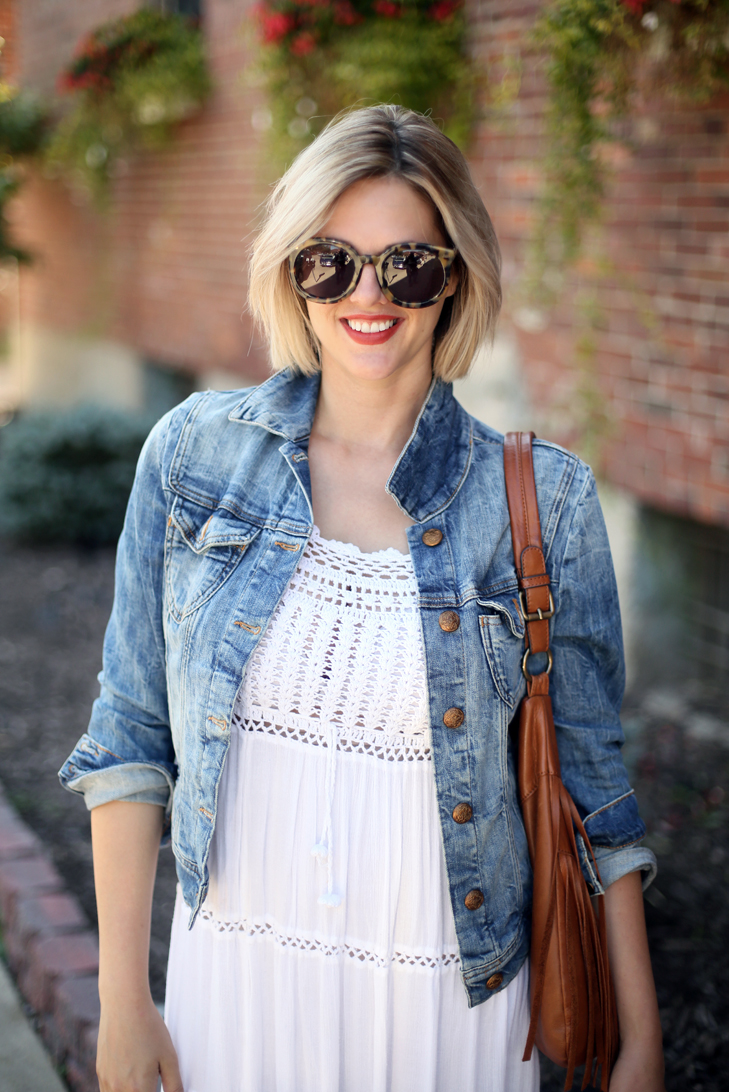 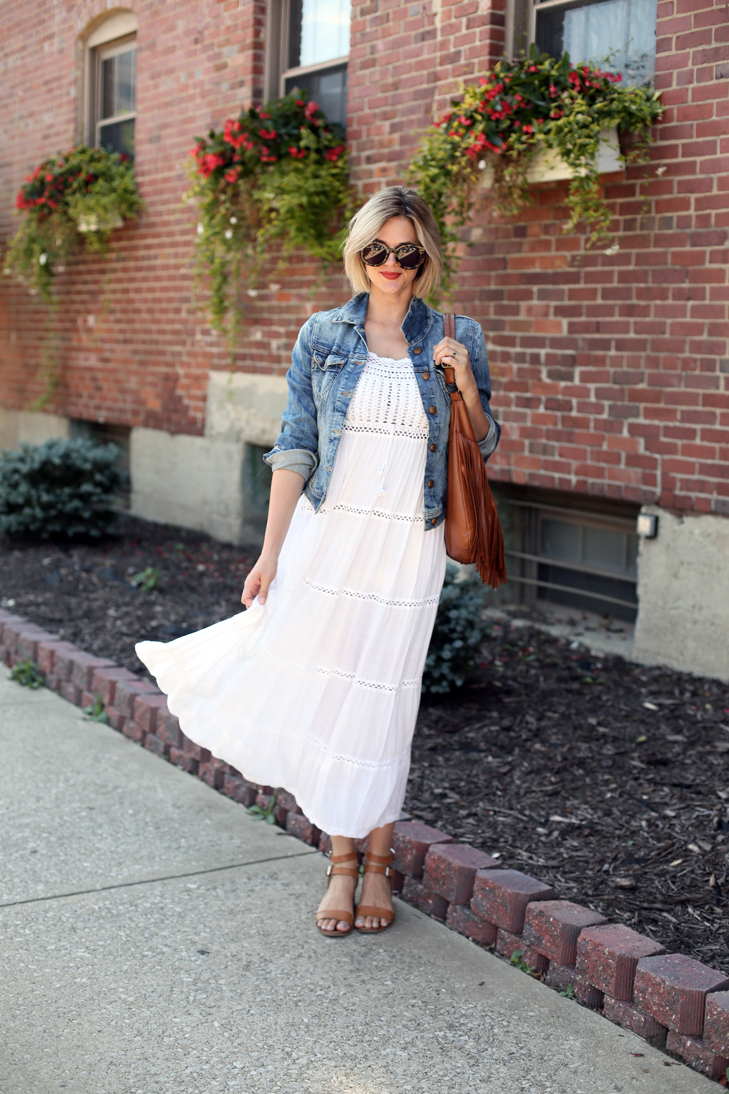 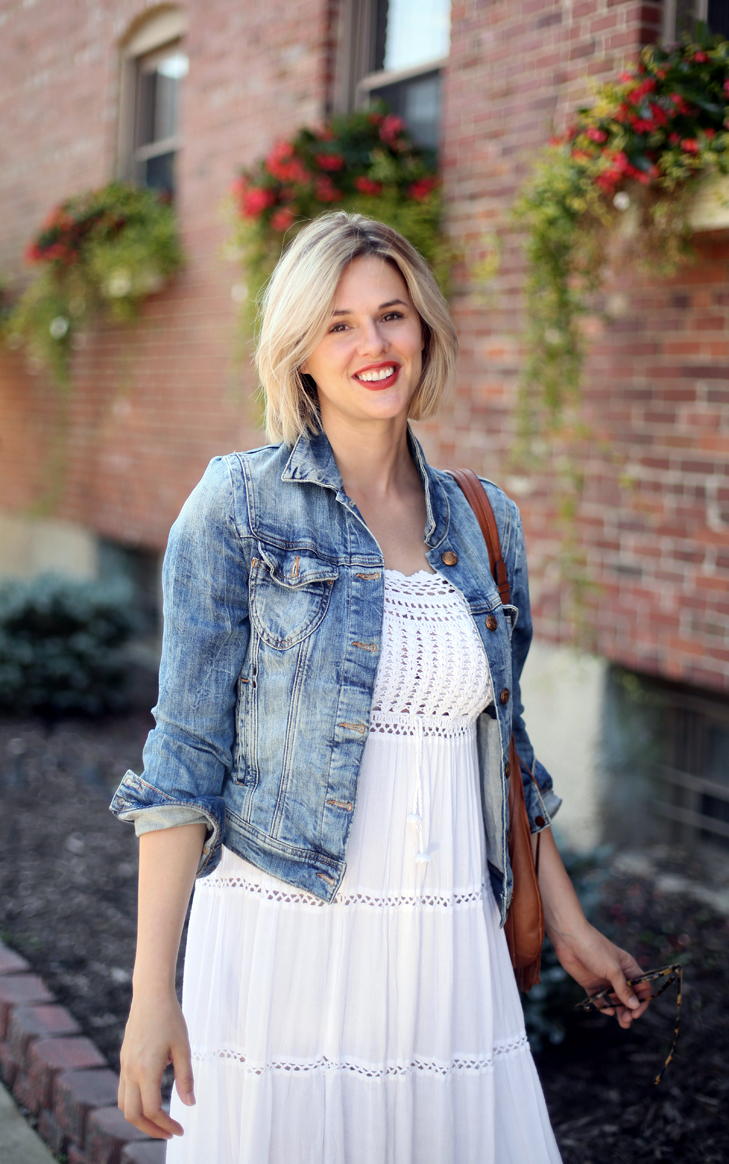 WhatIWore: I’m going a little out of order this week with outfit posts – this is what I wore over the weekend to go to the farmer’s market. The embroidered jean jacket has been on my mind for a while, so this is how I thought to wear it for the cool of the morning (see how I wore it for fall here and here). Not much else to say about this outfit other than this dress is one of Adam’s favorites and I love it too! I don’t wear it enough!

Where: Breakfast and Farmer’s Market 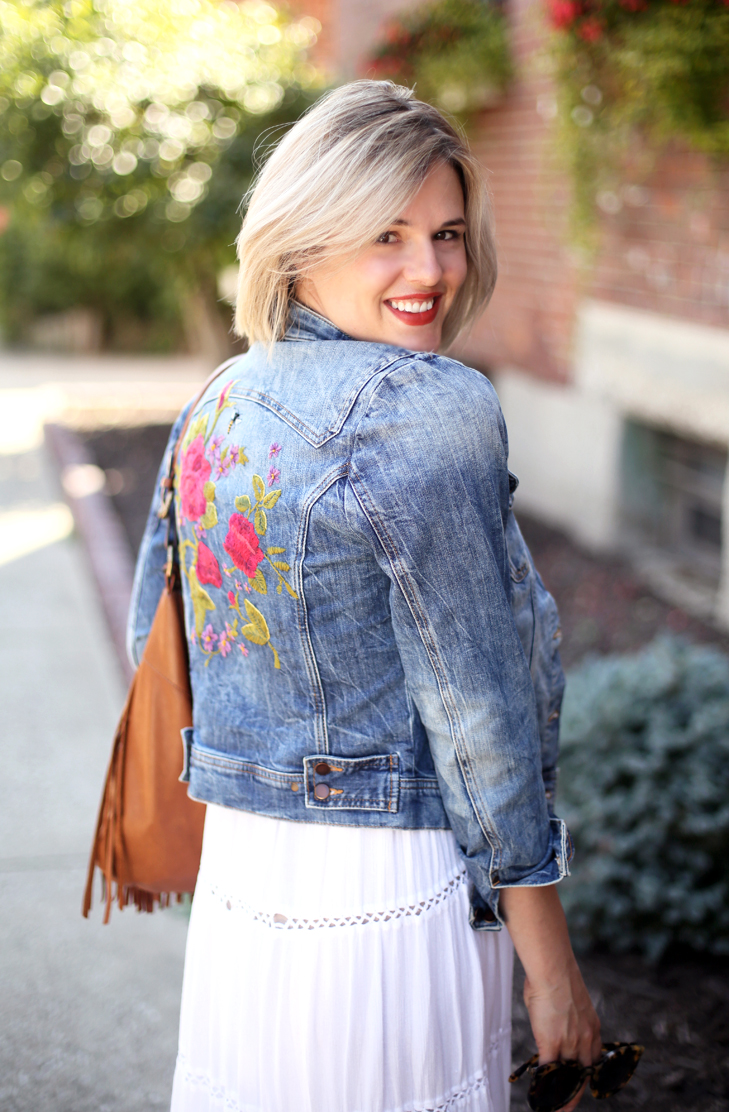 As you’re probably well aware, my wardrobe is tightly edited, so a new addition is thought through with consideration and care. I live by tried and tested style rules mainly around colour, as well as shapes and silhouettes I know suit my body shape. You could certainly fine me under a uniform dresser without hesitation.

Breaking these rules for me is unheard, however, I can still have fun with my style. Minimal certainly doesn’t mean boring. How? Its about finding exciting pieces that no one else has and injecting them, styled back with my core wardrobe.

Where to find such things? Premium, second hand stores like Vestiaire Collective, that’s where. These vintage YSL gold earrings were an absolute steal, so much so I also picked up another pair as well.

Although I do a little vintage shopping when I travel, I’m not the kind of person that enjoys rummaging through tubs of clothes, i’m a lot more comfortable doing it from behind my computer screen! The best part is, unlike other second hand sites (you know the ones), Vestiaire quality and authenticate everything so you can be sure you’re buying the real deal.

I do warn you that this site can get a little addictive! With new items constantly added I’m now hooked on their vintage jewellery as well as checking in on the newly added bags section. Happy shopping!

In collaboration with Vestiaire Collective

I have to admit, being on the other-side of the world sure makes me proud of my Antipodean designer buds. Nick and Bridge from LWB are pretty much the nicest team around so it’s pretty fitting I’m spending summer skipping around Paris in this sweet-hued dress.

This blogger paired 2 of our most covetable favorites; an off the shoulder white blouse and vintage denim. It doesn’t get much better than that. Pair the look with round sunglasses and square toe mary janes for that laid-back, summery vibe we all strive for. 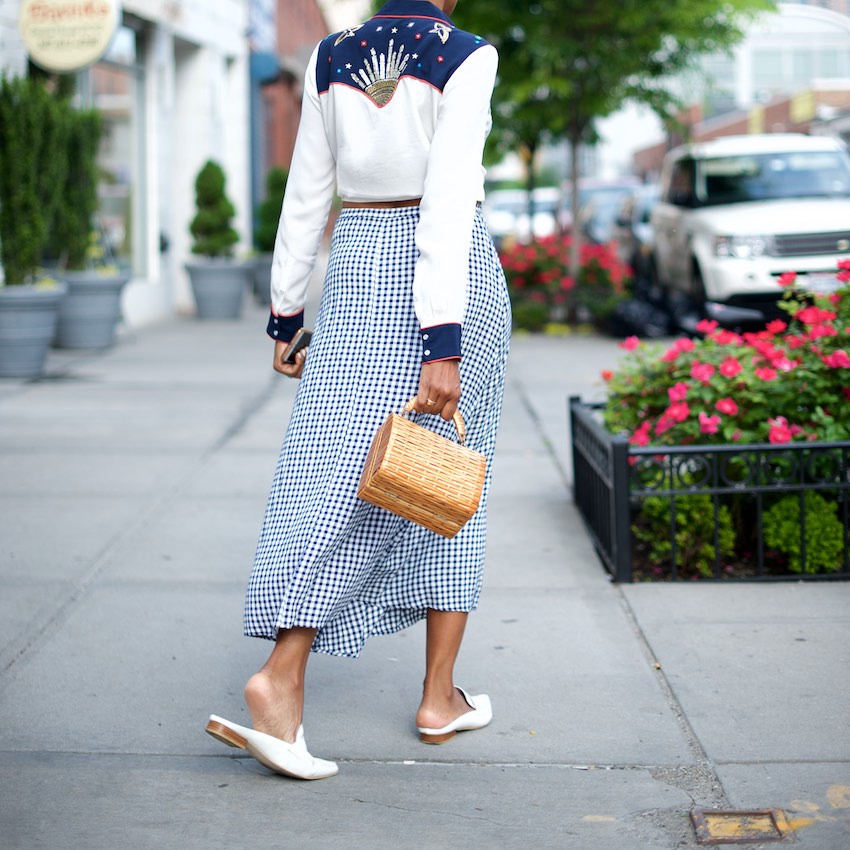 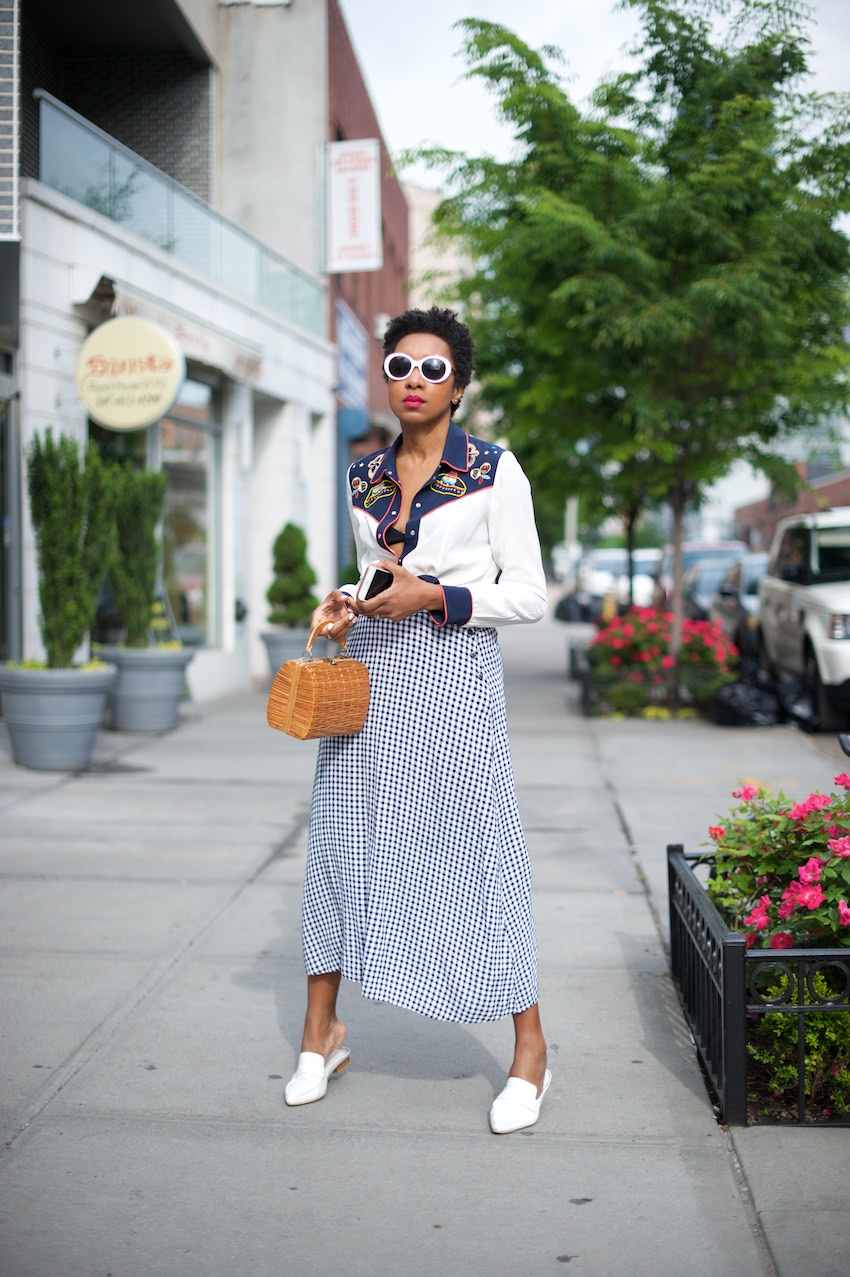 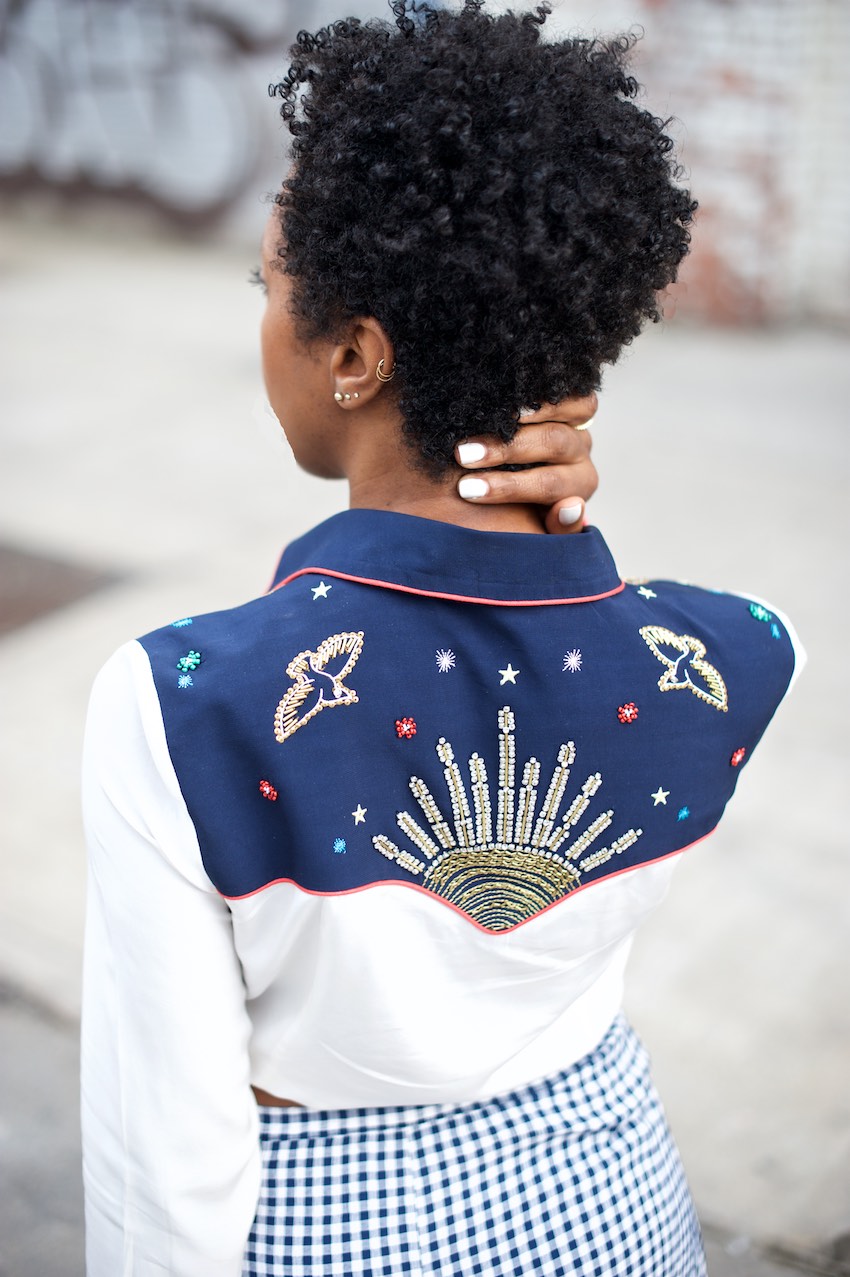 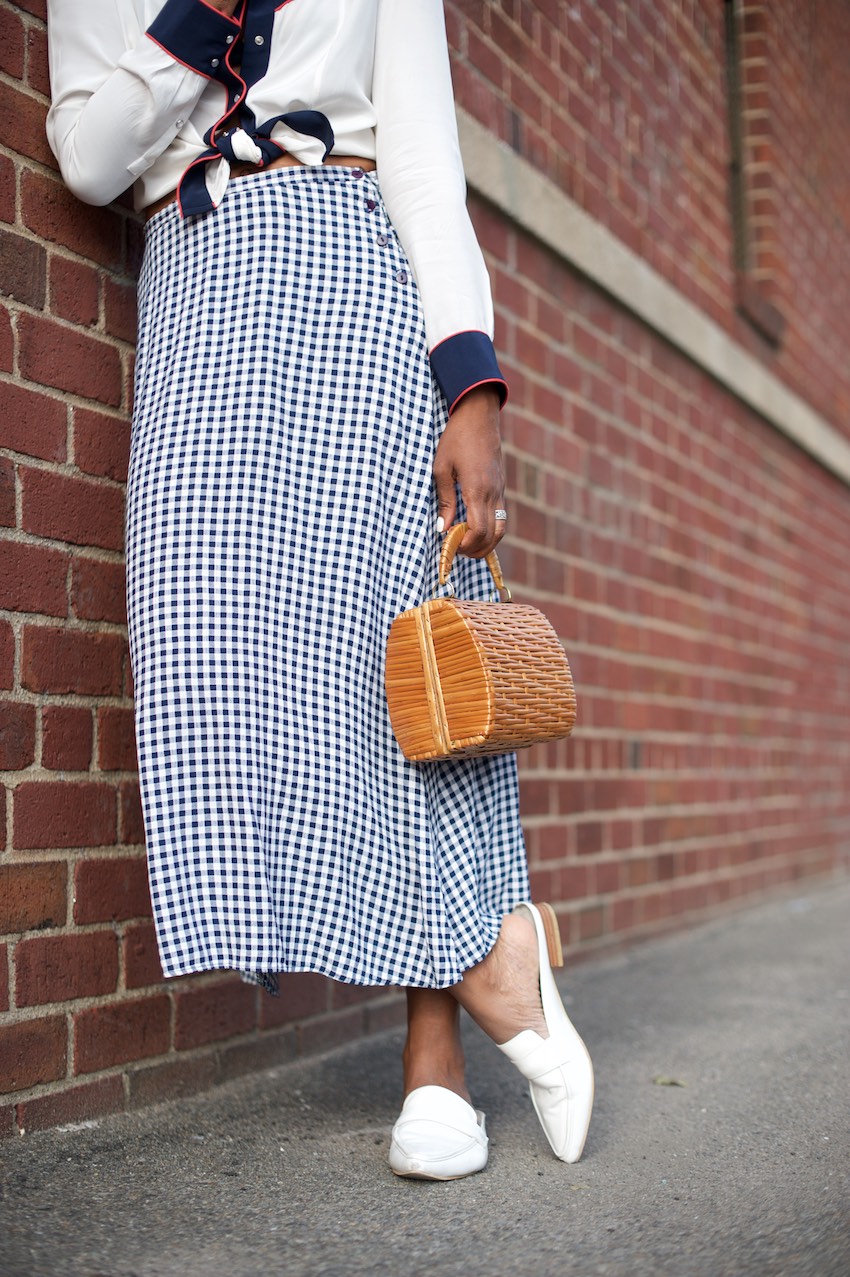 I used to really be into western shirts and still have a couple. Â I haven’t rotated them back in (yet) because the fabrics are a thick cotton that’s a bit much for this season. Â The above western shirtÂ is from &OtherStories and is slinky enough to wear knotted or tucked into a skirt or jeans.

The beaded details around the front and back sold it to be honest.

Speaking of shirts, did you see my new YouTube video on 11 ways to wear a shirt?

I wore it with a thrifted vintage gingham skirt and a wicker bag I spotted on Etsy. Â I linked to the seller below and also a few other fave wicker bags.

The post The Western Shirt appeared first on Where Did U Get That. 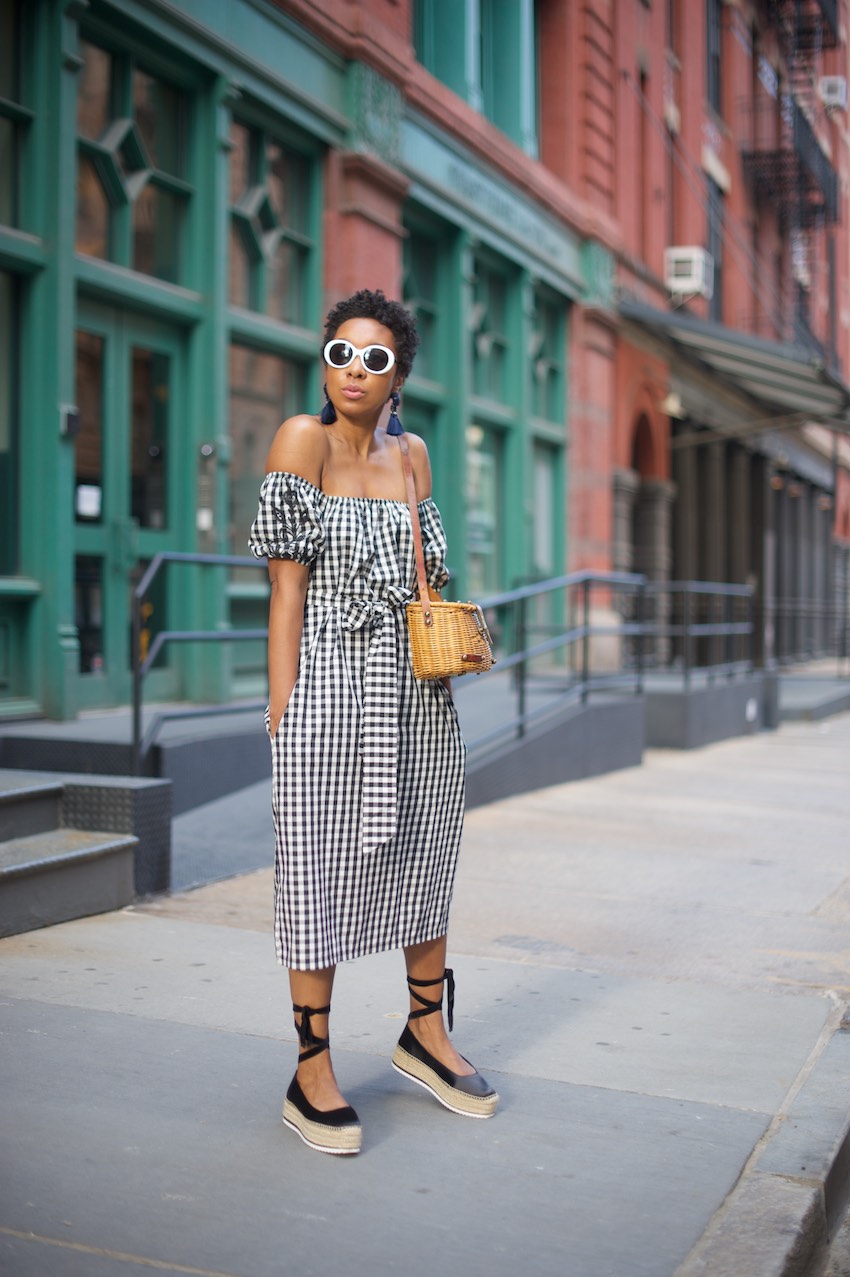 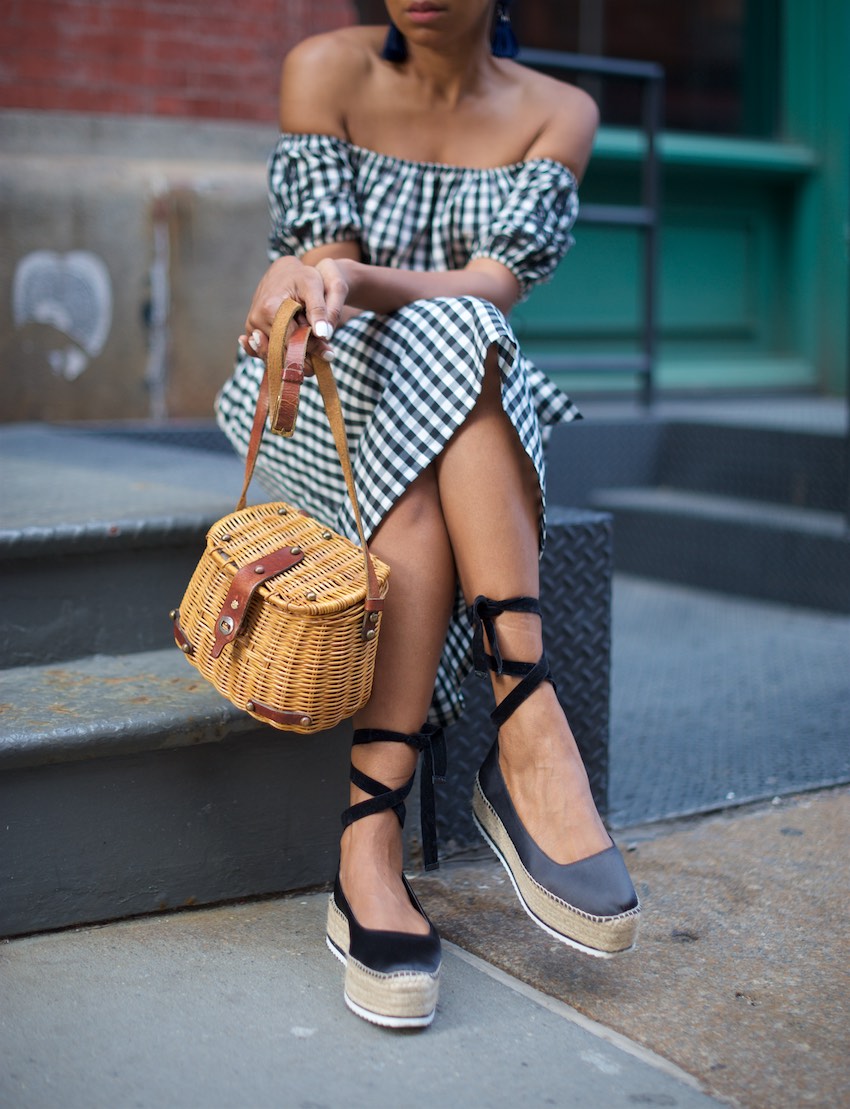 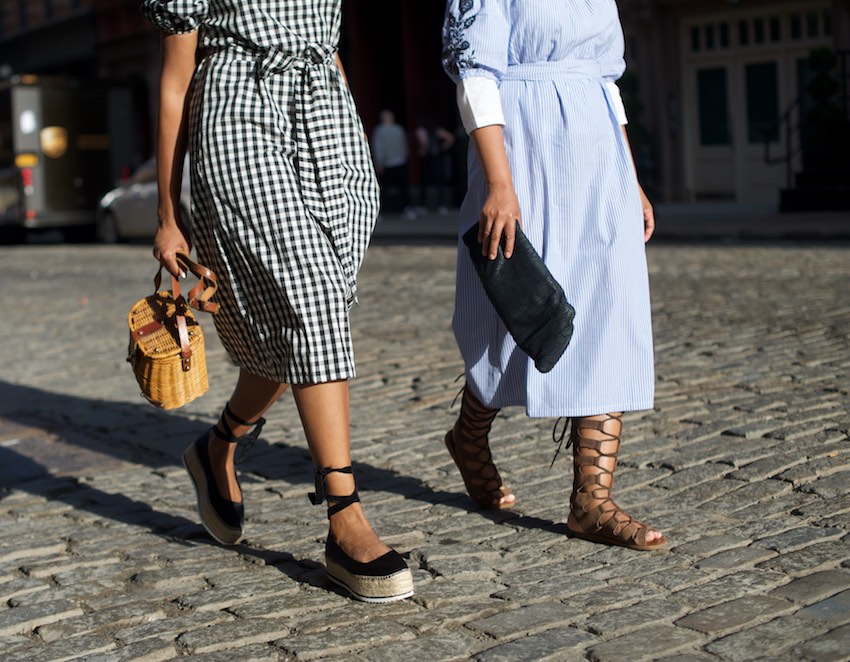 At bloody last it is actually warm enough to dust offÂ a gingham spring dress. Â  The trend in gingham had me caving for this oneÂ with wait for it, side pockets. Â If those pockets were not on there I’m not even sure that I would’ve got it. Â Have you caved yet on any gingham pieces? I did a recent blog post about gingham which was enough for me to start pin pointing what to go for.

You can see how my friend Tiffany (and photographer for this post) wore the same dress in pinstripeÂ on Tuesday on The Werk! Place.

ps. Speaking of dresses, did you see my current video about summer dresses on YouTube?

pps. Michael and I are in New Orleans from tomorrow. Â Make sure to follow on my Snapchat and Instagram storiesÂ – Karenbritchick

The post Gingham Spring Dress appeared first on Where Did U Get That.

I posted this little vintage wicker bag on my Instagram @karenbritchick and had a lot of you asking about it. Â I found mine at a local vintage shop that sells vintage straw and wicker bags.

Personally I’m into vintage style wicker bags (with the exception of the Cult Gaia ark bag). Â To me they have more character and look better plus I like them structuredÂ soÂ they clash but compliment anything throughout spring and summer. Â  You can find straw or wicker bags almost everywhere and at different price points, remember this post where I listed a few for you? Â  Some of you told me that you already have an old vintage straw bag given to you byÂ a relative or something which is perfect (if you like it too of course).

For those who are into bags like mine show above, below are some vintage wicker bags that have that similar vibe. Â My blouseÂ is also listed (I am wearing it back to front). Â It took every ounce of strength to resist buying another vintageÂ bagÂ from the selection below.

If you get one, tag me on Instagram so we can live vicariously through each other?

The post The Best Vintage Wicker Bags appeared first on Where Did U Get That.

Head in the clouds in LA! Well.. clouds of bougainvillea, that is. I’ve had such a productive week after coming back from Korea. We shot a lot of …

The post Denim Shorts and Vintage Blazer appeared first on Song of Style.

Iâ€™ve generally always prescribed to the adage â€œAll dressed up with nowhere to goâ€�.Â  Post Nico though, that phrase has become a â€œfunâ€� game of sorts.Â  I say fun of course, taken with a huge pinch of Epsom salt, given the limitations of what one can do with a two month old baby in tow.Â  But when you snatch one or two hours from the day, whilst tethered to the house for fear of carting a screaming baby around town, putting together elaborate outfits at home is sadly about as good as it gets.

All of this fanciful dress-up thatâ€™s been confined to the home happens to fall in line with both current season Pradaâ€™s marabou frou frou fancies and Miu Miuâ€™s well-tred territory of retro geometrics.Â  Miuccia Prada has long held fascinations with bygone notions of femininity, reflecting, reproducing and subverting them in a myriad of ways.Â  For S/S 17, Prada was quite literally dusted down with the help of a 1950s Stepford homemakerâ€™s feather duster.Â  For Miu Miu, Miuccia imagined frolicking around on a beach in simpler and more innocent times.Â  So it stands to reason that my homebound state should be accompanied by the most ornate of idealised haus frau attire.Â  From these collections, specifically a Prada peach feathered geometric wrap skirt and a Miu Miu jacket rendered in a print fit for a mid-century chaise lounge become integral puzzle pieces to this love-in with retro-tinted domesticity.Â  Abigailâ€™s Party esque entertaining, ridiculously over trimmed peignoirs and negligees (those very words invite cynical chortles) and Western-lensed chinoiserie best expressed in Vladimir Tretchikoffâ€™s kitschy The Green Lady painting all come to mind.Â  These are the sort of clothes that are made for lounging artfully at home amidst pieces of Danish furniture and strategically placed plants.Â

Alas, Iâ€™m only make-believing such antics in my N15 hovel.Â  You canâ€™t see the brushed aside piles of Pampers 2, Water Wipes and milk-drenched muslin cloths.Â  Brow-raising feminists out there will be glad to know that this temporary fascination withÂ  airbrushed visions of housewives of that mid-century era is fortunately only an aesthetic one.Â  I am slowly easing myself back into the land of the working, having snuck in a business Skype call and a casual writing deadline here and there.Â  Still, if I canâ€™t get to ze fashions, ze fashions will come to me.Â  Even if theyâ€™re destined for breast milk stains and poop smears.

I’ve been so caught up in styling cuties for CoolPretty.CoolÂ I’ve been neglecting my own outfits. Â That teamed with the fact that I’m completely clearing out my Sydney apartment, moving out next week and getting on a plane to London.

I’ll be spending a few months travelling around, after London there will be a stint in Athens and Rome. Then in May you can most likely expect to see me back in Sydney for MBFWA.

So enjoy this bright summery outfit… it might be the most colour you see on me for a few months as I layer up and head to colder climates! 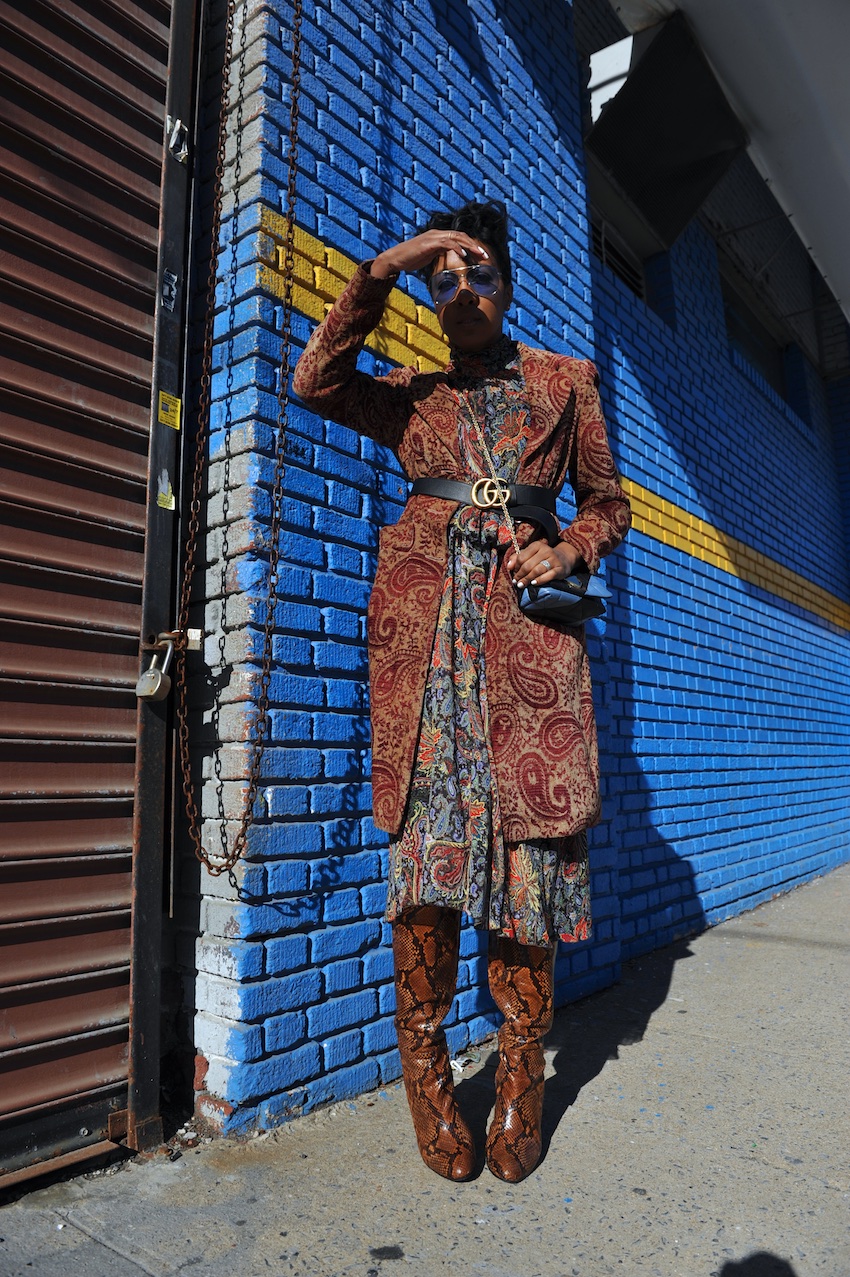 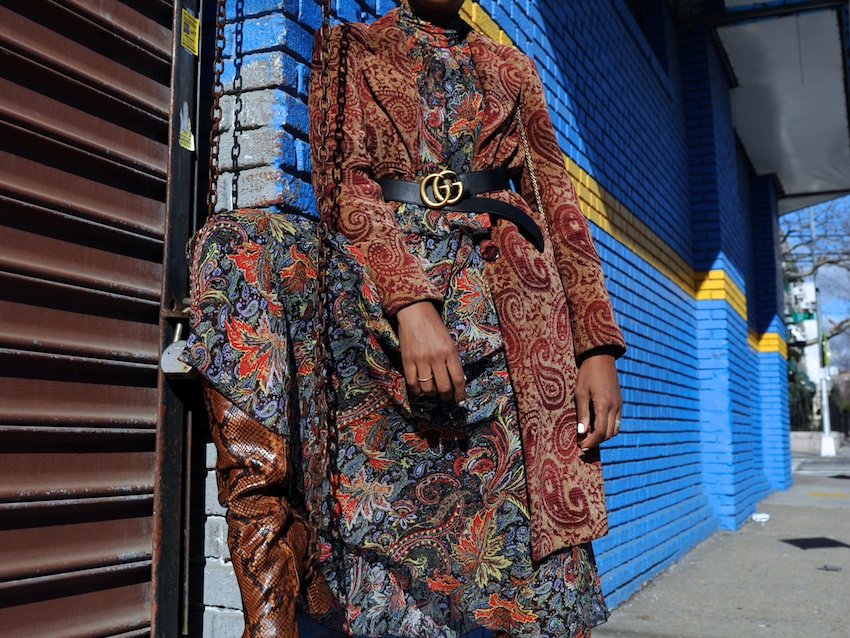 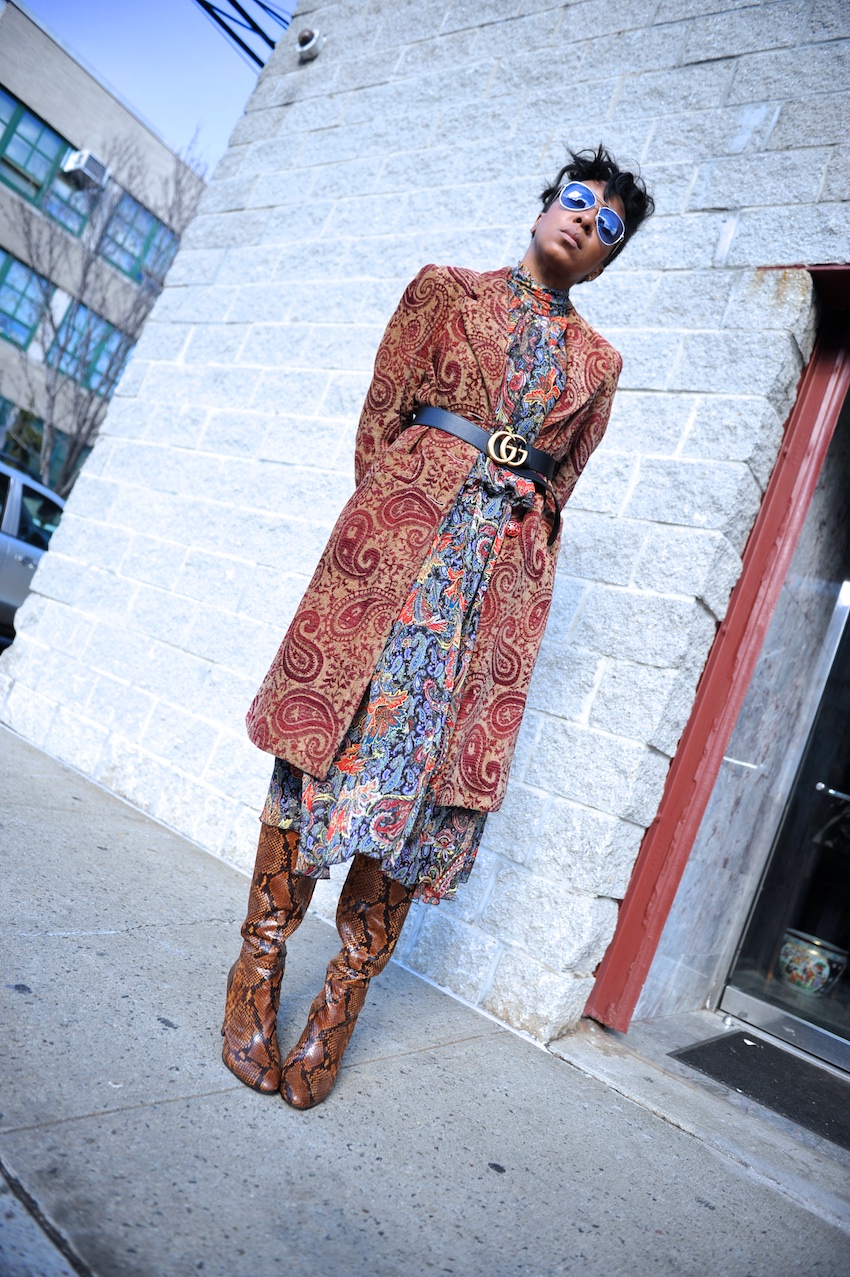 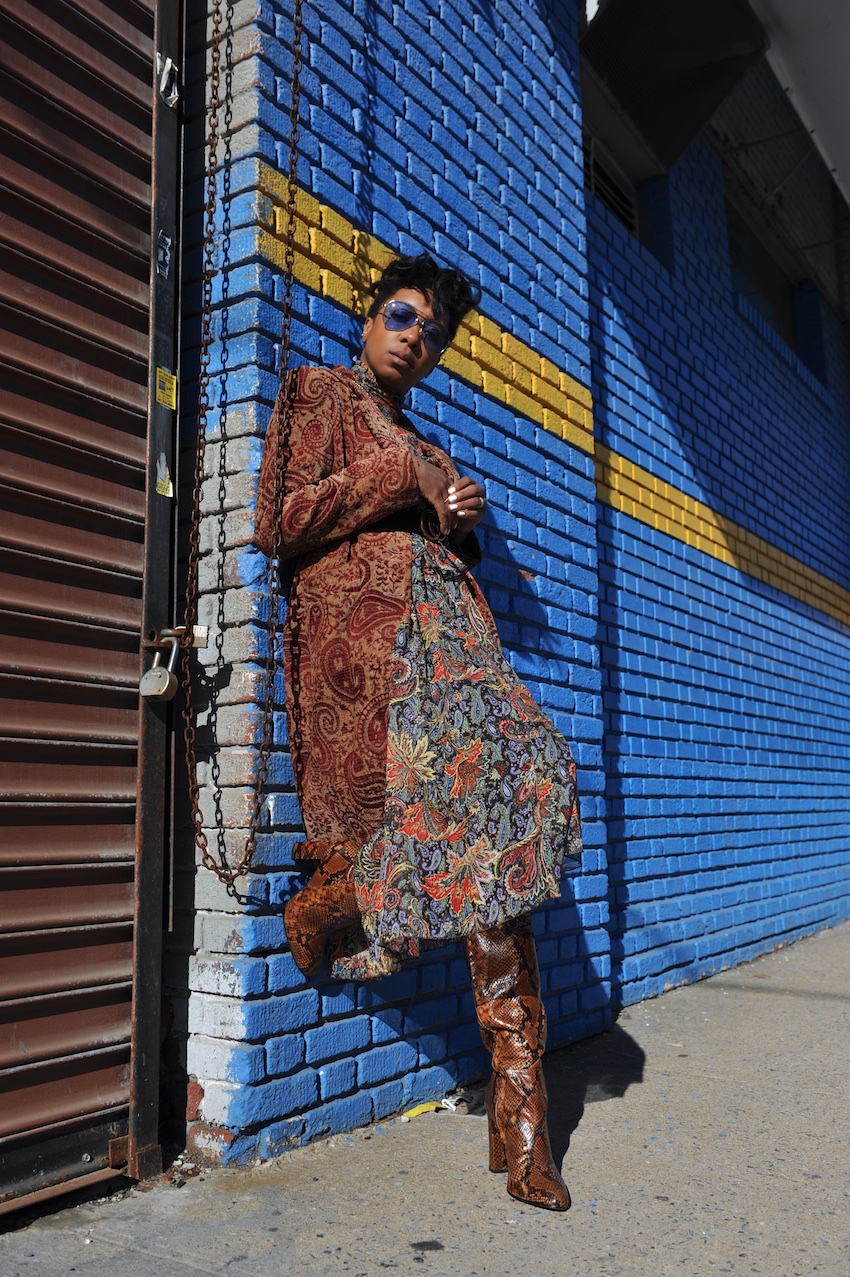 You know that I’m going through a hair journey. Â  My chemical relaxer is almost all gone and I’m running on natural hair for the first time in years. Â Last week I went back to the Sassoon salon and had another chat with Senior Creative Director Elaine Mitchell who suggested exactly what I have beenÂ toying around in my head: grow out my natural hairÂ again butÂ experiment with different styles all along the way.

Elaine created these loose curlsÂ while we exchanged photos of natural black hair styles. Â Am I a hair chameleon? Bloody right I am so watch this space.

The whole salon experience inspired me to revisit another styleÂ that I’ve not exploredÂ for ages;Â mixing prints. Â  Â I call this more is more and I’m not one to shy away from experimenting – something Sassoon salon has clearly beenÂ encouraging.

Some serious lurking around the backstreets of Kings Cross in cropped/flared denim (the best combo ever BTW).

And THESE studded shoes which honestly, are the best thing to grace my feet since those bumble bee striped heelsÂ I nabbed last year.